We have just escaped from a time travel experience created by the Colonial Williamsburg Foundation and the National Park Service.

Colonial Williamsburg, located within the city of Williamsburg, Virginia is an eighteenth century village alive with actor-citizens going about their lives of work, society and politics (to tour online click here).  For us, it was an experience unlike any other. In Colonial Williamsburg, actors portray different historical figures such as George Washington, Thomas Jefferson and PatrickHenry, as well as lesser-known tradespeople, servants and slaves. We got to ask their impersonators questions, learn interesting facts about their lives, and hear their views about the political climate just before the Revolutionary War in Williamsburg. One can actually go online to the Foundation website and meet these folks, finding facts and anecdotes that historians have learned about each person.
We also heard from actors portraying actors who were destitute after the Continental Congress had banned the theatre and all forms of acting, along with horse racing, gambling and other idle pursuits unsuitable for a time of war and austerity. And we met Edith Cumbo, an 18th century free black woman, who told us that there were as many Africans as Europeans in the town in 1774, many of whom were free tradespeople like herself. Historic records prove that she did indeed exist because there was a court case recognizing her right to own land, as well as a record of the punishment of an assailant, one of the first documents of a battered woman in America fighting back.

We ventured into dark businesses and taverns in a cold, drenching rain, as grateful as the impersonators for the well-stocked fireplaces and stoves. We also enjoyed talks and musical performances at the very modern museums (endowed with Rockefeller money), which from the grounds looks like just another colonial brick building. Descending into the bowels of this huge museum, one is greeted with gallery after gallery of colonial ceramics, firearms, furniture, toys, portraiture and several halls with visiting exhibits.
One of these, “Threads of Feeling,” was a very moving exhibit of tiny ribbons and scraps of fabric that accompanied some of the thousands of children that were surrendered to the London Foundling Home, an institution that claims to be the oldest known children’s charity in the world. These tiny remnants and scraps reflected countless stories of loss and sorrow: babies abandoned, often by destitute mothers who hoped that the institution could better provide for them. 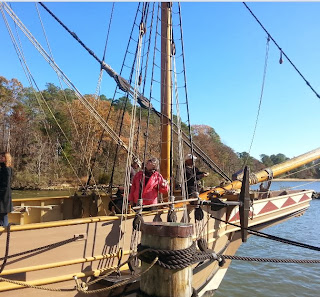 Finally the sun emerged on Thanksgiving Day as we headed south to the site of the ill-fated Jamestown colony on the banks of the James River. This sad saga is lavishly interpreted in a huge building of galleries and exhibits, along with a living history representation of a Powhatan Indian village, the old Fort James, and replicas of the vessels that brought colonists, slaves, soldiers and sailors to the site in the years before Plymouth was even contemplated. We were distressed with the lack of interesting female stories and the (seemingly innocent) acquisition of slaves by the colonists from the Portuguese. What was interesting is that Thanksgiving is an annual feast day at the site and both camps, Indian and English were cooking to illustrate what might be typical fare for a holiday. The Indians were butchering deer and turkeys and seafood and making soups, jerky and hominy while the colonists were butchering a pig and making mincemeat pasties, custards, cookies and cakes.

We enjoyed a modern and typical Thanksgiving meal in the museum café, had a nice stroll in the 40 degree sunshine, and rolled onto the free ferry to cross the James River in style.

On this glorious weekend of thanksgiving we send our greetings to all our dear friends and relations. We feel indeed blessed to be able to enjoy these travels in good health and high spirits. Thanks for following along.

Posted by Janna and Liz with Lilypad at 8:29 AM No comments: 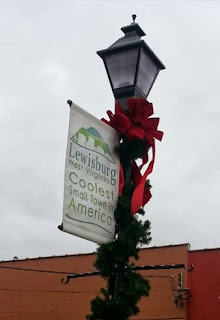 We are delighted that our travels are taking us to towns with buildings and cemetery markers from the 1600’s. We awoke on the outskirts of the 400-year-old town of Lewisburg, West Virginia, festooned with banners claiming their 2011 designation as “America’s Coolest Small Town.” After a stroll around down town (it is very cool), we got back in Lilypad and crossed over into Virginia just in time to catch the historic walking tour of Lexington. Our native-born guide showed us old buildings and told us great stories about early leveling of the downtown streets (similar to the Denny Regrade in Seattle), reconstruction, and the history of the two universities in town: Washington Lee University and the Virginia Military Institute. VMI cadets, sporting their grey livery, were all over town, many with proud parents and families, celebrating the annual event of the juniors ceremoniously receiving class rings. 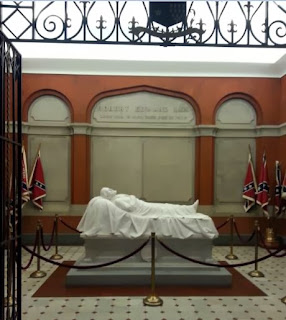 Lexington is also the town where Robert E. Lee retired after the Civil War. Here he became the president of the college that now bears his name. He is encrypted along with his wife and children, under Lee Chapel, on the grounds of the University. (And his horse, Traveler is buried next to this building.) Lee is much revered here, as is evident by the life-size recumbent statue of him (seemingly dead, but actually sleeping on a battlefield) on the altar of the chapel. The chapel is not used for religious services, but is the largest gathering place on campus and is used for many important gatherings of the student body. There is a street in town, and much else, including an active Episcopal Church that also bears Lee’s name.

Then we hopped on the last few miles of the Blue RidgeParkway and visited the birthplace of Cyrus McCormick, famous agriculturalist and inventor of improved farming equipment, most notably the reaper. Alas the museum was closed up for the winter but we so enjoyed the walk around the grounds, seeing the farm and buildings in which he worked, and the commemorative markers. 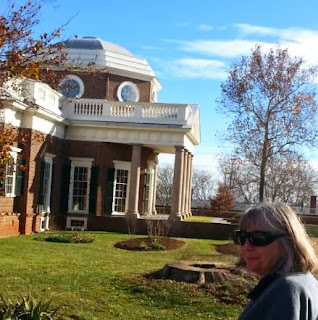 Since we were in the area, Monticello, famous home of Thomas Jefferson, was a must-see. Besides being the drafter of the Declaration of Independence, Jefferson served Virginia as senator and governor and of course, he was the third US President, ambassador to France and Vice-President . He eventually retired here with his family, including his slaves, and died here on the very bed that we walked by during our house tour.

The house was much-loved by Jefferson, and he worked 40 years in its completion. It was restored and is still operated by The Thomas Jefferson Foundation. One sees many incredible innovations such as water catchment, subterranean work and living spaces, skylights, and acres of gardens where Jefferson experimented with growing flowers and vegetables. Included throughout the house are objects of his many interests: books, fossils, Native American artifacts, paintings, rocks, his own inventions, and much more, portraying Jefferson as a man of curiosity, good taste, brilliance, and of course a strong sense of justice.

Much of the work on the building and maintenance of the house was done by enslaved people, which makes for an interesting theme since there is significant evidence he fathered six children by his slave, Sally Hemming. The only part of the grounds still in the control of the Jefferson family is the cemetery. These white descendants appear to be in conflict with the multiracial descendants, as many of the latter hope to join Jefferson and his white family in the cemetery. To date none have been invited. Jefferson wrote a significant amount against the institution of slavery in his early years, but didn’t think that white and black people could live under the same government. It would be interesting to learn more about these beliefs and his relationship with Sally who appears to be his only love after the early death of his wife (she died 19 years before he became president.) Jefferson himself left detailed records of names and occupations for everyone who worked and lived at Monticello. Historical perspective shifts when folks build with bricks, leave artifacts, and record what happens.
Posted by Janna and Liz with Lilypad at 6:11 AM No comments: