Our travels homeward from Canada led us back to our friends in Maine to weather out storm Arthur (three inches of rain in 18 hours!); then through beautiful New Hampshire where we visited the grave of May Sarton in Nelson; then into Vermont where we stopped to pay our respects at the Robert Frost Stone House Museum near Bennington. We pushed on to New York where we biked around Saratoga Spa State Park, a beautiful park with springs, swimming pools, geysers, tennis courts, golf courses, hotels, restaurants, historical buildings and  much more. (Put it on the must-see list and allow more than the three hours that we gave it.) After that we met up in Ithaca with our Florida friends Donna and Fran, on their way to the Maritime Provinces in their 26-foot motor home plus tow car. Piling into their little vehicle, we circled Lake Cayuga and paid our respects to the ladies (and gentlemen) of Seneca Falls at the Women's Rights National Historical Park which commemorates the first Women’s Rights Convention of 1848. We also enjoyed a rainy afternoon on the Cornell University campus, taking in the Johnson Art Gallery and the Sapsucker Woods Ornithology Laboratory where we amused ourselves in the bird and animal sounds lab. And of course the four of us went out to a fabulous last-night dinner at the famous Moosewood Restaurant.

Heading west, we stopped at the Corning Museum of Glass where we learned a great deal about glass: how it’s made, how it breaks, safety glass, fiber optics, glass blowing and the history of glass. It’s a fabulous museum and also includes a stunning collection of glass art. Then it was off to immerse ourselves in the phenomena known as Chautauqua, an historic resort community by Chautauqua Lake, New York. Founded in 1874 as a summer school for Methodist Sunday school teachers, Chautauqua became associated with a concept of adult education and summer entertainment that includes lectures, performing arts, religious study and recreation.  In the early twentieth century the Chautauqua concept was so popular that traveling versions evolved and radiated across America. Today the nonprofit Chautauqua Institute convenes every summer to host lectures, performances, and art exhibits for the 8000 residents that come each week and stay in the hotels or their own cottages. Intrigued by the concept, we purchased $5 bus tour tickets and were shown much of the grounds by an enthusiastic middle aged docent who had grown up summering at the resort. We jumped ship at the bookstore and took ourselves on a little stroll through the grounds as well. But to appreciate Chautauqua, one might need to become immersed in the program. It’s a place geared toward the exploration of ideas and the appreciation of arts; but our impression from the bus tour was of a privileged and exclusive summer resort.

We are always looking for roads that have authentic experiences and local meaning attached to them. With that in mind we headed for the Ohio River Scenic Byway, a lush river valley splendid with summer greenery. The 960-mile highway travels through Ohio, Indiana and Illinois and one can frequently look across the Ohio River at West Virginia, Kentucky and Missouri. We started at the northeastern most point and followed it for 150 miles or so before turning off for our next rendezvous. As we followed this highway, we alternated between marveling at the natural beauty and feeling appalled by the countless factories, nuclear power plants, coal plants, and barges transporting coal and gravel up and down the river. But the farms and little towns were beautiful, including Steubenville Ohio that featured historic murals, an idea that was brought all the way to Steubenville by someone who was inspired by the murals in Chemainus, BC.  We then headed to Tar Hollow State Park near Chillicothe Ohio to meet up with our Kentucky daughter and son-in-law, for a fun and peaceful, albeit wet, weekend in the woods.

Wow! We are amazed to find ourselves moving right along into the mid-west. Yesterday we drove across Indiana on the National Road, US Route 40. This was the first federal highway across America and was authorized during Jefferson’s administration in 1808 to connect the Potomac and Ohio rivers. The Indiana section was completed in 1834 and remained the state’s major east-west road until Interstate 70 was built in the 1960’s. Today it links little historic towns that are aging in various ways, and goes through the middle of Indianapolis. In between the towns are fields of soybeans and corn and little springs supporting native plants. Tomorrow: Illinois. We are moving west and seeing America.
Posted by Janna and Liz with Lilypad at 4:56 PM No comments:

Music and More in the Maritimes

We are finally headed back to the USA after nearly seven weeks in the Maritimes. Tonight we are on Campobello Island, famous summer retreat for Franklin and Eleanor Roosevelt, a truly lovely spot for our last night in Canada. The Maritimes were more than we ever imagined and we are sad to leave, especially, as we have discovered, now that the tourist season has just started. We now know that there are many major public events and festivals that don’t start until the official season kicks off on Canada Day, July 1st.  We were somewhat disappointed not to have found more music, but did find a few venues that gave us a taste of what the islands have to offer. 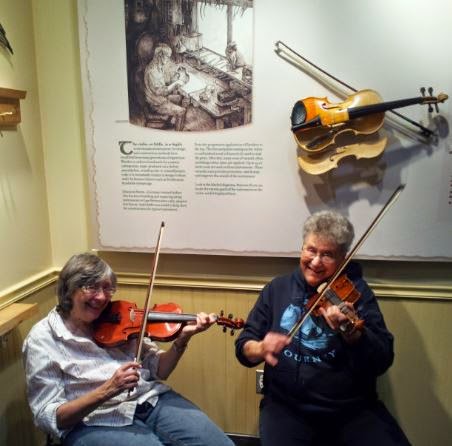 Our favorite has to be the Celtic Music Interpretation Centre in the tiny village of Judique, Cape Breton. This area is home to Natalie McMaster whom Friday Harbor music lovers will remember from her sellout concert on our island about a decade ago. We were so impressed with her ability to dance, sing and play the fiddle all at the same time. We didn’t get to see her here, as she is again touring in the US and Canada (this time with her fiddler husband and five young children!) But at the Centre we learned about her musical family, and had a great time learning to hear the differences in fiddle tunes that make up sets for dancing: reels, jigs, strathspeys and more.  We tried our hands at playing a fiddle and our feet at Scottish dancing (which resulted in a lot of laughing at ourselves.) And we enjoyed local seafood for lunch at the Centre while two musicians performed Celtic tunes. Judique is one of several coastal villages that continue a unique musical tradition that came from Scotland over 300 years ago and singing and dancing are a big part of life here on the shores of Cape Breton.

A couple of days later we were in bustling Charlottetown, capital of the Province of Prince Edward Island. There on a warm summer’s evening we found a street band set up to entertain the customers of a half-dozen restaurants and we had a delicious meal while enjoying  young people playing jazz. Charlottetown is the home of “North America’s longest running musical”, the story of Anne of Green Gables but, as noted above, our travels were ahead of the tourist season and we were there just a few days too early to catch the opening show of the season. What we did enjoy, however, was an overnight at a Harvest Host site, The Shepherds Farm near Mt. Stewart. Our host Stephen Cousins gave us a tour of the farm and supplied us with organic new potatoes and asparagus for supper (as well as internet and a full hook-up, all at no cost.)

From there we drove through spectacular agricultural lands, new green crops in iron-rich red soil complemented by roadside lupines in full glory. We accidentally stumbled onto a “Gathering of the Clans,” at the College of Piping and Celtic Performing Arts in the town of Summerside. In spite of the warm temperature (30 degrees Celsius) we enjoyed the bag pipe and drum marching bands from the Halifax Citadel and Moncton, NB. We left early because of the heat, figuring ourselves to be fairly wimpish given that most of the performers were playing, marching about in the full sun AND wearing wool. But we went on to discover Summerside’s “Credit Union Place” that houses an Olympic size pool, waterslides, hockey rink and harness race track. It was fun to cool off in the pool and watch the horses trot by on the adjacent track. That night we boondocked at the terminus of the Baywalk, a 7 kilometer walking and biking trail that goes along the waterfront and features sites interpreting local natural and historical features.

Our next destination was the northwestern tip of PEI. We landed in Tignish in time for the annual Irish Moss Festival Parade, an event that lined the streets and featured most every antique tractor from all of PEI. We learned that Irish Moss, a sea vegetable containing high amounts of carrageenan, is still commercially harvested with horses here at North Cape. It’s a fishery that starts up as soon as the spring lobster season ends so folks shift gears and head back to the sea for a living once again. The North Cape of PEI also has hosted a major wind turbine research center since 1981 and sports an interesting visitor center and a four star restaurant overlooking the Gulf of St Lawrence. Coming back down the island the next day (after boondocking outside of and touring the Potato Museum) we meandered over to the Acadian Cultural Center at Abram Village where we enjoyed an Acadian lunch and a great concert by six people singing, dancing and playing a total of at least 14 instruments.

We love Canada where everyone seems less fearful and more relaxed about most everything.  But will be back in the US tomorrow. No Nancy, we aren’t becoming Canadians. Well not on this trip anyway.

Posted by Janna and Liz with Lilypad at 8:18 AM No comments: