Of Swamps and Springs

After leaving Charleston and the coast we headed up to Columbia to see our granddaughter Spring, a student at the University of South Carolina (Go Gamecocks!). We watched the holiday Carolina Carillion parade noticing that, in spite of there being about an equal number of blacks and whites in the parade, few of the floats and marching bands were racially integrated. Separate but equal appears to be alive and well in the south, at least from these northern eyes. We experienced just a glimpse of the harsh early December cold snap as we felt the temperature plunge from 67 to 47 degrees in the time it took to watch the parade. After making a plan with Spring for her to travel with us on her spring break, we took a quick tour of the campus and Spring’s dorm room. Then we headed south, leaving dear Spring swamped with studying  for upcoming finals. 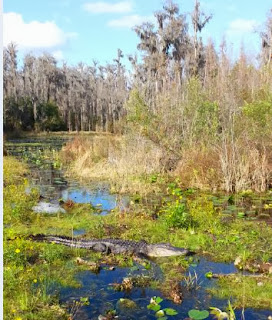 Our leisurely pace through central Georgia took us through tiny towns, small plots of cotton, collards, and onions (yes, we went through Vidalia) and vast acres of swamps and woodlots of pine trees. Finally we pulled into Stephen C Foster State Park in the middle of the Okefenokee National Wildlife Refuge. This is a vast acreage of floating peat, grass and lilypads, anchored by huge moss-covered Cyprus trees. We arrived just in time for the boat-trip out into the swamp and happily enjoyed the breeze of the ride as the temperature neared 80 degrees (and the humidity exceeded it). Alligators lounged in the sun and turtles lined up on logs as we floated down a major channel where dozens of ibis roosted. The little blue herons were well represented, as well as anhingas, cormorants and both black vultures and turkey vultures.

We crossed over into Florida and immediately headed to White Springs, formerly known for the healing waters and now home to the Stephen Foster Folk Cultural Center. Mr. Foster was never there but he added a great deal of spring to the area when he wrote about their river. They are swamped with visitors who want to see the “Swanee.”

Then we headed to one of our favorite campgrounds of our previous trip: Manatee Springs State Park. Manatee Spring emits between 50 and 150 million gallons of water a day into the lower Suwanee River. The temperature is 72 degrees year round which is why the manatees come to visit in the winter when the surrounding sea water temperature drops.  We took an evening walk through the park and were delighted to come across two very active armadillos, busily digging up the nuts that the squirrels were equally actively burying. In the morning, we took a walk down to the river and were blessed with the sight of two manatees sliding into the springs from the river, among the first to be seen this year. We’re feeling a bit swamped and have decided to take a blog holiday for the holidays. But don’t worry, we’ll be back before spring.

Happy holidays to everyone. Love, Liz and Janna
Posted by Janna and Liz with Lilypad at 12:33 PM 2 comments:

Slavery on Our Minds

We loved Charleston. It is an exceptional city of great vitality that embraces its history. There is much there about the Revolutionary War, the Civil War, and a great deal about the times since and in between. The people are warm, the food is great, the architecture is beautiful. We stayed at a KOA out of town and hired a licensed guide to take us around. It’s one of those places to which we want to return. There is also a great deal there on the topic of slavery and it was this historical issue that grabbed most of our attention.
Slavery is not an easy topic to write about. It’s not good dinner conversation. It’s not even easy to think about. Imagine standing in the space where people were bought and sold only 150 years ago. Imagine being in the space were innocent people were incarcerated and flogged and permanently separated from loved ones. Imagine being in a building where innocent people were murdered and the law of the land allowed it, even condoned it.

This is where we were this week at the historic Slave Mart Museum. The legislation banning the importation of slaves was passed by the United States in 1807, creating a major domestic market for people born into slavery. Known as Ryan’s Slave Mart from 1856-1863, this building was specifically designed and built in response to economic pressure to reduce the spectacle of slave auctions on the streets of Charleston, because these auctions clogged the streets with spectators which was bad for local business. Thus it became the largest indoor market of domestic slaves in North America. The City of Charleston acquired the property in 1988 and installed a small but powerful series of exhibits that tell this sad and painful story.

Also interesting is the recently evolving attention to facing the truth and scope of slavery, as evident in this New York Times article (click here). Be sure to watch the slide show if the topic is of interest. It traces some of the steps we took on our explorations of the last few days and their photographer took much better pictures than we did.
We also visited Boone Hall Plantation just outside of Charleston. Boone Hall was once one of the largest slave-holding plantations in the country, and today the privately-owned, continuously-working plantation hosts another of the best slave museums around. Because bricks were manufactured at Boone Hall, and because it was in the economic interest of the owners to build slave quarters out of brick, (discarded substandard bricks were plentiful and owners wanted to increase the value of slaves by teaching them masonry skills) the slave quarters were made from brick, and unlike the substandard wooden structures that most slaves lived in, these are still standing. The nine small houses, which held two or three or more families, now comprise nine small museums, each with a different theme on the subjects of slavery, civil rights, and the plight of black people in America.  Included was the victory for America at the election of our first president of African descent married to the great great granddaughter of a slave from a plantation just an hour away from this one.

What we don’t always talk about is how the fruits of these unremunerated labors were a major aspect of the gross national product for the entire country. Northern factories created garments from the cotton produced in the South; slave-produced rice, corn, soybeans and pecans were also major crops in demand in the North. The displays at the Slave Mart Museum and Boone Hall helped us understand how all of America was complicit in the institution of slavery because the economic growth of the country was paramount.
Many of the people that were originally brought to Lowland South Carolina were from West Africa, desirable because of their experience in rice farming. As a result, they brought and shared language and culture and over the last 300 years and have managed to keep Gullah and Geechee heritages alive. Portions of South Carolina, Georgia and Florida are identified as a cultural heritage corridor recognizing the contributions and qualities of culture brought by the descendants of those first slaves. Near Charleston there are many roadside stands exhibiting elaborate and beautiful sweet-grass baskets, one of the important crafts brought over from Africa.We admired many and bought one little bell shaped basket for our holiday decoration.


Posted by Janna and Liz with Lilypad at 7:01 AM No comments:


Traveling as far east in the United States as we are likely to get for now, we have been exploring the Outer Banks of North Carolina. These long and narrow islands are actually sand dunes that are constantly in motion and despite that fact, humans are determined to build houses and roads and bridges on them, allowing for easy travel for Lilypad. We saw pelicans, cormorants, sea ducks, sandpipers, loons and egrets sharing the waterways. We were very impressed with spectacular salt marshes and shorelines lined with shell fragments, and we also got to see one of the five wild horse herds that have roamed these outer banks since they swam ashore from Spanish shipwrecks in the 1500’s. 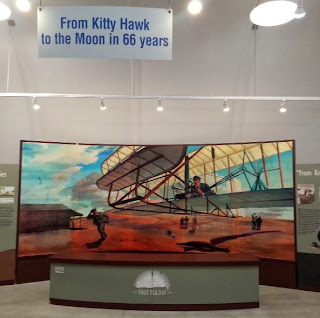 Shipwrecks are a prevailing theme everywhere we stopped, including at Kill Devil Hill, where the Wright brothers accomplished their amazing feat of flight. It was the lifesaving corps from Kitty Hawk (stationed there to provide aid to ships in distress) that helped the brothers position their “machine” on the top of the hill for the take-off on December 17, 1903.  Talking to the NPS volunteer  at the Cape Hatteras Lighthouse (who by the way, also served at American Camp on San Juan Island), we learned that this area is known as the “Graveyard of the Atlantic” and there is estimated to be more than 2000 ships and boats at the bottom of the surrounding sea. It always gratifies us to find places where nature prevails over the futile efforts of humans.

We took the North Carolina state ferry between Hatteras and Ocracoke Island, delighted to learn that it was a state-supported free ferry. We stopped to chat with a Maine couple in their eighties who were onboard driving their 40-foot motorhome plus tow car, on their 27th trip to Florida. Ken and Helen started RVing in 1959 with motorhomes he built himself, and have been through countless rigs. They have traveled all the way to Alaska twice. For fun they “went for drives” and seemingly every weekend and every vacation was spent RVing with their three daughters. They have been all over the US and remembered dates, campgrounds and roads effortlessly. When we questioned Ken about their plan to boondock at the Ocracoke-Cedar Island ferry terminal (given the sign proclaiming “No Camping”) Ken responded, “Hell, I ain’t camping, I’m waiting for the ferry.” We ended up boondocking beside them. 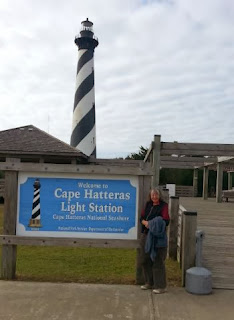 We have to add this little island to our list of places that intrigue and attract us. It has the right blend of spectacular nature, history, arts, and real people scrambling to make a living. We ate spectacular seafood, walked on deserted shell-lined beaches, encountered folks intent on preserving historic buildings, viewed sand dunes, marsh habitat and wild horses, read about lifesaving traditions and witnessed the creativity of artists at every turn.  Ocracoke village itself is a walking town and visitors are urged to “park your car and visit us up close” either by foot or via the ubiquitous golf-cart or bike rentals. In spite of a long season, and the impending winter closure of most of the seasonal businesses, we found locals cheerful and happy to chat.

Further down the road, and following the campground advice of Ken and Helen, we ran into them again in a North Carolina National Forest campground. Another couple of hours passed as we plied them with questions about destinations, campsites, roads and RV maintenance. For every issue we could raise they had great tales of experience, misadventure, how to save money and lots of good advice. They’ll be back home in Maine for the summer. We have their phone number.
Posted by Janna and Liz with Lilypad at 5:59 PM 1 comment: